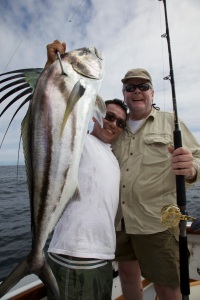 BiG roosters out there now at Litibu

The last couple of nights we´ve seen some heavy rain in Puerto Vallarta and while there are those that think the rain is bad for fishing, they couldn´t be more wrong! In fact, if it rains, it´s even better for fishing. Rightnow I would think that the fish are coming to the surface looking for some ¨Cool¨ water. But the fish, especially Dorado, think that when the rain drops hit the surface of the water, it’s bait returning to the water after jumping out to escape being eaten! It’s an old trick to use the wash down hose to sprinkle the water, then cast a bait in the midle of it. On days when you know the fish are there, and they won´t bite, this works! Keep this to yourself, it´s our secret!

Back to the fishing, Roosters and Dorado both like the organic bits and pieces that come down the mountains with the rain. They eat the smaller fish that like this organic stuff also.  So after a rain can be the best time to go after these beauties….

Right now the area around Litibu, or up near Punta Mita, very close in, you´ll find Rooster fish, Dorado, Jack Crevalls, Dorado, and more. But you first have to be out there before anything can happen!

Included in this post is a  Rooster Fish I caught some time back in case you´ve never seen one before!

We´ve also had some extreme tides lately. This along with the high water temperatures have been tough to deal with. But fish are now being boated in the reef and in-shore areas so the shot time angler can get something for the dinner table and not spend more time than he can afford or would like in the sun!

There are great deals on hotels and air fares are about as cheap as I´ve ever seen them…. Something to think about when the States are freezing! When a trip is less money than your electric, water, and gas bills combined, then it’s time to think of a vacation…